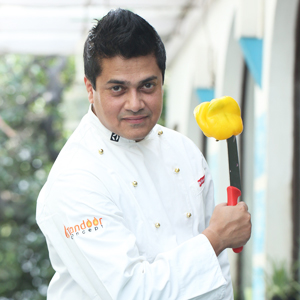 The Chef with the Midas touch !

Chef Saby, who has a cult following in the culinary world, hails from a mofussil town in West Bengal – Asansol. As the President of the Young Chefs’ Forum of the Indian Federation of Culinary Associations (IFCA), the dynamic Chef also happens to be the youngest Indian Chef to don the hat of a Corporate Chef while at Olive Bar and Restaurants. Armed with the knowledge that he has gathered over the years, Chef Saby is almost an institution in himself.

Chef Saby finds reminiscent of his contribution to the profession, though his biggest reward comes from “cooking for a fellow human being.” Incidentally, he has wowed the likes of the Ambanis and the Bachchans with his culinary skills.

A philanthropist, an educator and mentor to young Chefs, this dynamic Chef-entrepreneur is the founder member of prominent Indian Chef’s associations – IFCA, WICA (West India), SICA (South India) – and is also a member of and mentor in the Indian Culinary Federation (ICF).

The success of this ‘FOODPRENEUR’ Chef’s restaurant projects has been documented by YourStory while his best-seller restaurant Lavaash by Saby in the capital got featured in the Nat Geo Traveller. A regular panelist in various knowledge forums across the country, Chef Saby features as a case study across B-schools in the UK through Ten minutes with.com to inspire students.

Chef Saby has endorsed some of the finest F&B products and brands from across the globe (including the world’s finest kitchen appliances brand Miele from Germany, Olives from Spain, USDA, Godrej Nature’s Basket, Le Marche, Electrolux, and so on.)

Back to Advisory Board